RECEPTION OF THE LAITY.

On Tuesday the opportunity was afforded to a great crowd of lay Catholics of offering their respectful congratulations and affectionate homage to their Cathedral at Archbishop’s House. The numbers that attended and kissed the ring and spoke a few words of congratulation and good wishes, testified both to the popularity of the Cardinal Archbishop and the delight with which his people have welcomed the honour conferred upon him by the Holy Father.

Previous to the general reception his Eminence received the members of the Catholic Women’s League of the Province of Westminster. Mrs. J. S. Hope, on behalf of the League, presented him with an address, and the design, prepared by Mr. John A. Marshall, the Cathedral’s architect, of the metropolitan processional cross which they purpose presenting to the Cardinal on its completion in May or June next. This beautiful work of art will be in silver, and of Byzantine design, while it will bear the following inscription : “To the glory of God and in homage to Francis Bourne, Cardinal Archbishop, this cross is dedicated and offered by the Catholic Women’s League of the Province of Westminster, 1912.”

The Cardinal bore traces of fatigue after his recent exertions, and, as he informed his visitors in greeting them, suffered from loss of voice, In attendance were his Gentiluomo, Mr. M. Dunlop, and his private chaplain, Father Lionel Evans. Also present were the Right Rev. the Bishop of Amycla, the Right Rev. the Bishop of Cambysopolis, the Bishops-Auxiliary of the Archdiocese, the Chancellor, the Right Rev. Mgr. Bidwell, the Very Rev. Mgr. Jackman, the Very Rev. Mgr. Carton de Wiart, and Father Henry Daly. The crowds that poured in inconveniently crowded the Reception Room early in the afternoon, and overflowed into the great Throne Room, which before long became also uncomfortably thronged. In this room, laid out, with its great tassels extended, on a table beneath Mr. Ponsonby Staples’ picture of Cardinal Manning’s reception of the laity, was the great Cardinal’s hat, the striking emblem of the Archbishop’s new dignity. 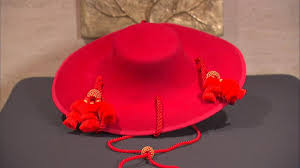 The above text was found on p.33, 27th January 1912 in “The Tablet: The International Catholic News Weekly.” Reproduced with kind permission of the Publisher. The Tablet can be found at http://www.thetablet.co.uk .