The cuttings about “Clio” Rickman, and John Rickman were in a book called” A Hundred Years of Enterprise, Centenary of the Clay Cross Company Ltd” privately printed in 1937.  There was a third piece of paper in the book which is a handwritten partial family tree,  tracing fourteen generations of Rickmans back [well technically eleven generations on the piece of paper, and the last three on the inside flyleaf]. It’s fascinating, and frustrating at the same time because it traces back a direct male line with references to the siblings as “4 others” and so on. But it’s an impressive piece of research for the 1960’s and stretches back to 1512.

The first generation is Richard Rickman in Wardleham, near Selbourne, Hampshire, with a wife called Isabel. They are listed as having at least two sons; John born in 1542, and William, five years later, in “about” 1547. William is the direct ancestor, and the notes against him are as follows “Born about 1547 at Wardleham. Removed to Stanton Prior, near Bath where his children were born, and where he purchased the manor, advowson, and other appurtenances.” 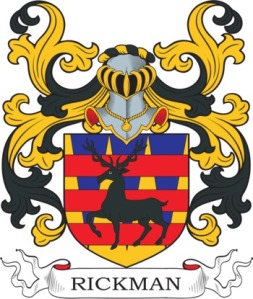 The following is from the opening chapter of the “Life and letters of John Rickman”  by Orlo Williams, Houghton Mifflin Company, Boston and New York, 1912.    “From the genealogical researches made by John Rickman ‘s father, the Rev. Thomas Rickman, it appears that the family of Rickman, Rykeman, or Richman, originated in Somersetshire, for the arms or,[gold background] three piles azure,[blue wedge]  three bars gules,[red stripes] over all a stag trippant  [represented in the act of walking] ; with a crest, a stag’s head couped proper were originally granted to Rickman of Somersetshire. The family seems to have overflowed first into Dorsetshire, where John Ritcheman is known to have been rector of Porton in 1380, and members of the family represented Lyme in Parliament in the reigns of Henry iv. and Henry v. The Rickmans of Hampshire, from whom John Rickman more immediately sprang, had the same arms and a slightly different crest with the motto, ‘ Fortitude in Adversity.’ The earliest mention of the family is in the parish register of Wardleham, where the baptism of John Rickman, son of Richard Rickman and Isabel his wife, is recorded in 1542. A William Rickman who lived at Marchwood in Eling [ Marchwood is a village on the edge of Southampton water just east of the New Forest. Eling is the parish it is in] appears in 1556 among the subscribers to the defence of the country against the Spanish Armada. In 1623 a Richard Rickman was married at Eling to Elizabeth Stubbs, and their son William was baptised in 1627. The son of this William, James Rickman, was father of three sons, William, John, and James, the first of whom was born in 1701 at Milford. John Rickman, the subject of this book, was his grandson.”

It appears probable that John, and Clio are related, but with no disrespect to the Rev. Thomas Rickman there seem to be gaps between Richard Rickman in 1623, and the earlier Richard Rickman in 1542. We definitely claim the earlier Richard and Isabel Rickman as the parents of William Rickman who moved to Stanton Prior, where the family were for two generations of John Rickmans.  John Rickman Junior (1611-1680) moved to Hampshire to a house called “Inams” or “Inhams” in Great Hamwood, three miles from Alton, in the parish of Selbourne. His son, John Rickman III (1656- 1722) , was the first of the family to become a Quaker. He is “Clio” Rickman’s great grandfather.

It seems likely that the Richard Rickman, whose son was christened in 1542, was the elder brother of the William Rickman recorded at Marchwood in 1556. If so this would make John Rickman (1771-1840) and Thomas “Clio” Rickman (1761-1834) seventh cousins, but with radically different politics.